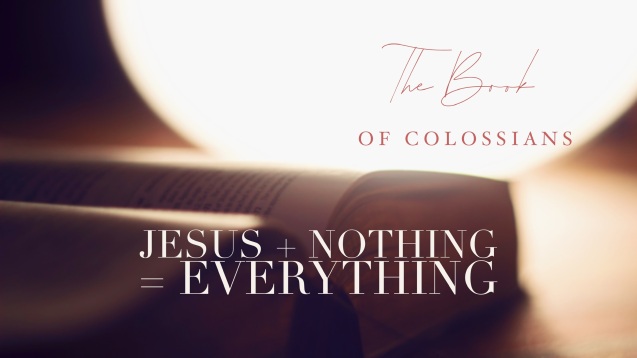 As a Christian, not only do you have the assurance that your sin is forgiven and you are free from condemnation, but God has made you a new creation and given you a new way to live.

This new way of living enables you to enjoy the best of this world God created without all the side effects of brokenness and heartbreak that comes with chasing carnal desires.

Making Jesus the center of your life means overcoming every obstacle is possible. Just as Paul started the letter, he finishes by sharing wisdom on how to live as new creations in a broken world.

We are going to start with the last things first. Paul makes a list thanking the people who have helped him, people we would not know about unless he said something. Often we attribute success to a single person without recognizing how many people were involved behind the scene.

It takes the contribution of everyone for success in any venture. There’s no small or insignificant part. It’s about everyone doing their part. If one person wins, we all win!

Paul’s acknowledgment shows that his success in evangelism and discipleship would not have been as significant if it were not for those, “behind the scenes” individuals that helped bring everything together.

“I planted, Apollos watered, but God gave the growth.” 1 Corinthians 3:6

Each part is vital to the growth part. Are you doing your part?

In his closing remarks, Paul reinforces the discipline of prayer.

Prayer is not preparation for ministry; prayer is ministry.

Paul gives three adjectives that define the activity of prayer. First Paul says to be “steadfast in prayer,” or “be devoted in prayer.”

This phrase means to tarry, to endure at doing something, to see it through to the end, implies intense effort. This means we must be determined to pray beyond our breaking point.

Prayer works because it’s based on the power and authority of God. Your prayer is effective because of the faith you have in a living, all-powerful God.

With every prayer, God is dismantling the spiritual strongholds. No prayer is ever wasted!

The second adjective Paul uses is to be watchful.

This word means to be on the alert, vigilant, continuous readiness. Watchful is a significant Biblical principle.

When God selected Gideon to lead a revolt against Israel’s enemies, He did the unthinkable! Gideon found 20,000 men willing to fight but God’s plans were to use only 300 men and make a statement.

But to those who knelt on one knee and used their hand to scoop water to their mouth, that person is to stay. The men who dropped to one knee remained alert and watchful and were ready for battle at any moment.

This is how we are to be in prayer; ready at all times. Modern-day philosopher, William Smith (AKA The Fresh Prince of Bel Air), said this, “If you stay ready, you don’t have to get ready.”

Another facet of being watchful is to know the signs of the times. Being watchful of the trends and activities in the world so you know how to pray. Pray for those affected by injustice. Do something when you have the opportunity but pray!

The third adjective of prayer is thanksgiving.

When your heart is filled with thanksgiving you don’t have room for envy or jealousy. Thanksgiving takes your mind off of what you want and with appreciation celebrates what you have.

The unthankful person is never satisfied, even after they get what they want, it’s never enough.

Paul’s final statement in verse 6 is key to our witness and interactions with the world.

“6 Let your speech always be gracious, seasoned with salt, so that you may know how you ought to answer each person.” Colossians 4:6

Paul’s statement that our speech be gracious and seasoned with salt, influences our readiness and credibility to answer people when they ask about your faith.

Salt preserves and gives flavor. “Oh, taste and see that the LORD is good!” Psalm 34:8 As “outsiders” observe your relationship with God it should cause them to desire to know Him too! Let your speech be gracious and bring hope and life to all your interactions.