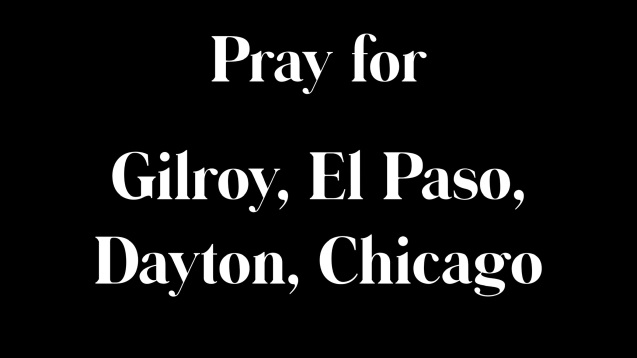 This has been a tough week for America and Americans. You may be one of many who are attempting to sort through and process thoughts and emotions regarding the horrific shootings that took place in Gilroy, El Paso, Dayton and Chicago.

Why would anyone choose to inflict so much pain on others? Science attempts to profile the character and nature of these shooters but the bottom line is we live in a fallen world and mankind is evil.

Intrinsically, we are not good. When mankind rejects God, not just on a personal level but on a fundamental one, evil is allowed to prosper within one’s heart.

Before there was government, established religion, politics or guns, in Genesis 4:8 we read, “Now Cain said to his brother Abel, “Let’s go out to the field.” While they were in the field, Cain attacked his brother Abel and killed him.”

Cain and Abel were brothers. Abel honored God with the best offering he could give. Cain lacked the reverence for and honor of God with his offering and resented God and his brother for it.

In response, Cain lures his brother away from others and kills him. Then later, he denies knowing where his brother is at. This unfortunate story is exhibit one of humanity’s corrupt state, and we have seen this story repeat itself over and over.

Grieving is a process.

Before we take to social media to point fingers and assign blame, give yourself time to grieve and process. As a Christian, a better use of your time and energy is to get on your knees and pray for the comfort and peace of God for those who have been directly affected by these recent events.

Let’s not overlook the terrible loss of our fellow American’s by raising our voice in opposition to policies or politicians but let us grieve for and with those who have lost a loved one.

There will be a time for a passionate and respectful debate on how we can minimize these mass shootings. There must be reasonable reform. But remember, Cain did not need a gun to kill his brother. The primary issue is the sinful heart of mankind that can only find redemption in Jesus Christ.

For more insight check out this blog post from a good friend of mine, Marty Couch. She is a Licensed Marriage and Family Therapist and a Licensed Professional Clinical Counselor.

The Aftermath of a Mass Shooting